Often incorrectly referred to by some engineers as the cavity，the mould impression is a hollow area contained inside the mould into which molten polymer is injected and allowed to cool. When a mould tool contains more than a single impression, it is referred to as a multi-impression tool. Mould tool size is often characterised by the number of impressions contained within it, e.g. a 4-impression mould, 64-impression mould，etc. The impression is created as a result of bringing together two distinct components during closure of the mould，known as the core and cavity. 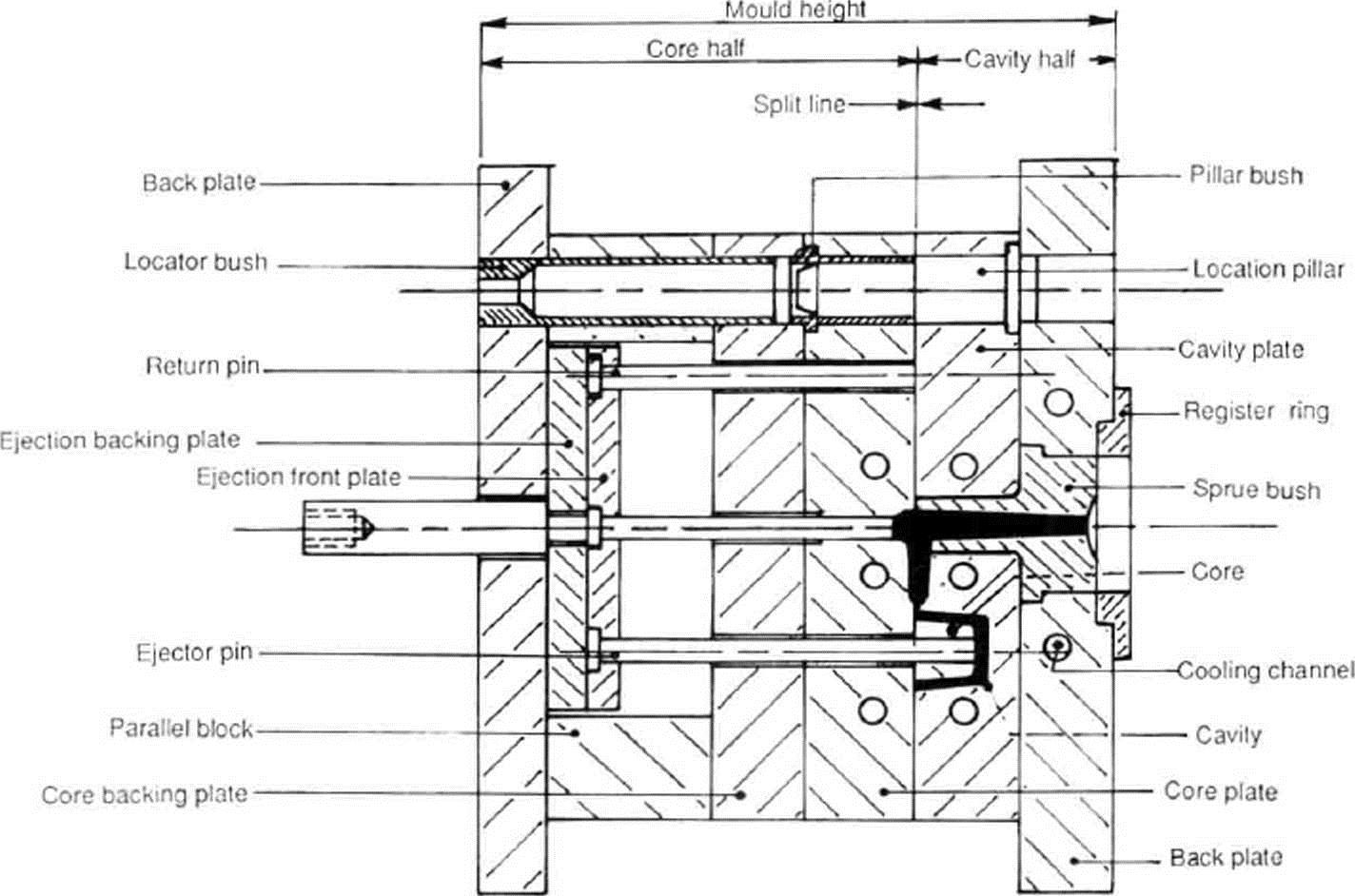 The mould cavity forms the exterior or presentation face of the moulding and is recognisable as the female component which constitutes the impression. The cavity，like the core, is retained or situated in its own mould plate which bears its name，the cavity plate. The remaining half of the mould tool which contains the cavity is referred to as the cavity half and is usually clamped to the fixed platen of the moulding machine  in front of the injection unit. The mould feed system is usually located in the cavity half of the mould due to its proximity to the machine injection unit.
With the tendency for tool designers to locate the ejection system in the core half and the feed system in the cavity half, it is easy to understand the influence tool design has over moulding machine choice of configuration. Hence the most commonly encountered machine design being the in-line’ configuration.

The point at which the core and cavity components interface on mould closure is referred to as the split or part line . Split line position on the moulded component is determined by the complexity of the core and cavity interface. Mould designers often position the split line to simplify the mould design in terms of reducing tool sophistication and easing moulded component ejection. 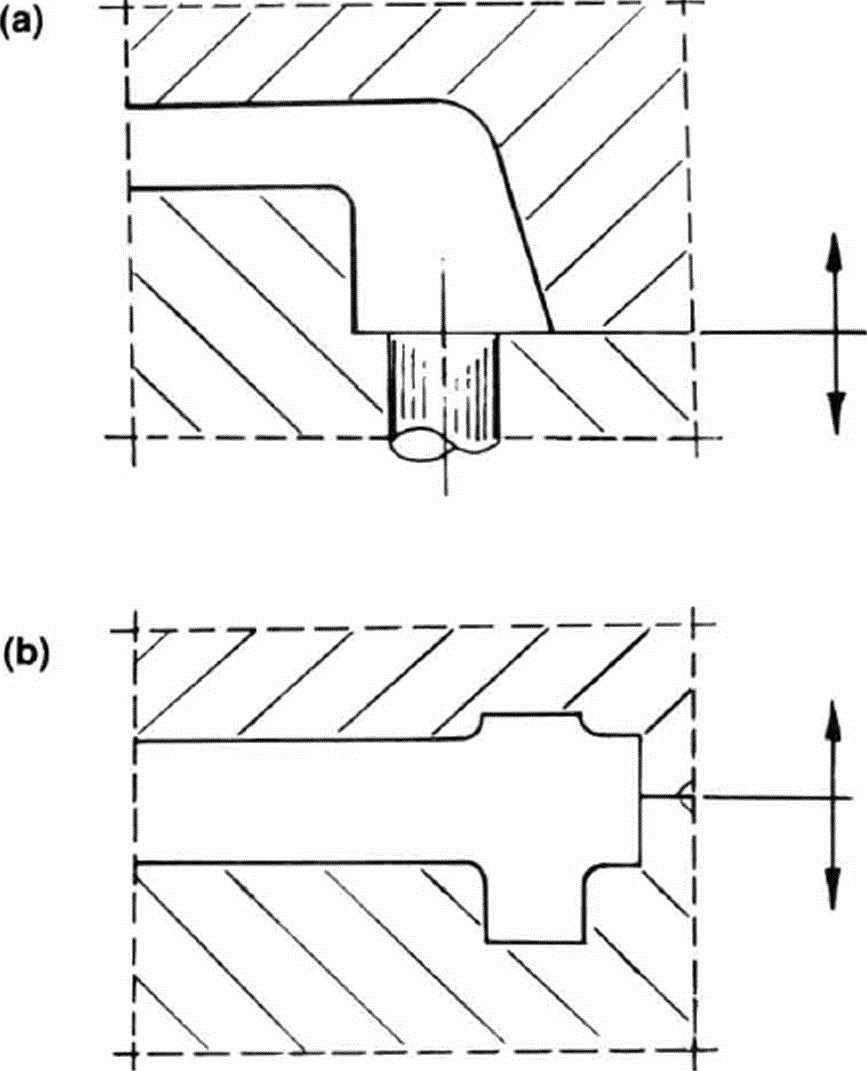 During the cavity filling sequence of the moulding operation the incoming polymer melt forces trapped air into the mould. Due to the high tooling accuracy requirement of injection moulds, the trapped air is often unable to escape from the split line. For this reason，shallow slots  are ground into the split line mating faces to allow the trapped air to escape during mould filling. The slot depths are sufficient to allow air to escape but not deep enough to allow molten polymer to flow down them and create flash. The individual slots are referred to as ‘vents’ and collectively as “venting”.Vent slot depth is determined by the viscosity of the polymer resin to be moulded; polymers of very low melt viscosity dictate shallow vent slots whereas polymers of higher melt viscosity enable deeper more efficient slots to be employed 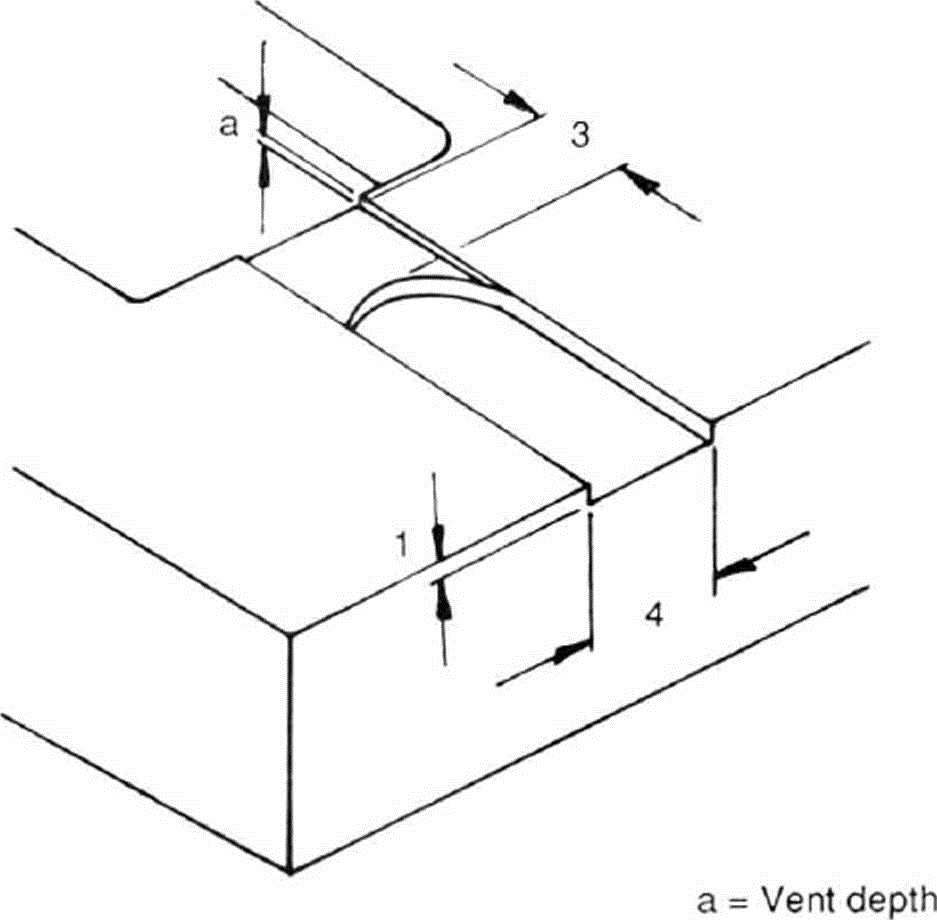 Mould tool ejection systems vary enormously both in complexity and design. The prime function of any ejector system must be that of clearing the moulded components away from the mould on opening, thus enabling the press to recycle. Once clear of the mould the components free fall under gravity away from the moulding area or are removed by other means，e.g. by robot. Usually situated in the core half of the mould, the ejection system can be actuated by the moulding machine or the opening action of the mould.

A few of the most commonly encountered ejection components arc listed and described below.

The sprue bush is a headed cylindrical component  about a tapered polished bore. The bush is usually positioned in the cavity half of the mould and provides an entry point for the machine injection unit to feed the mould. To minimise the chance of leakage between the bush and the machine nozzle, a spherical concave radius is often machined into the head of the component to provide a suitable contact seat. The feed passageway is polished and tapered to ensure the solidified sprue is pulled back with the core half of the tool on mould opening for ejection purposes. Sprue bushes are frequently damaged in service and should be treated as a standard mould part by mould designers.

Provision for adequate location of the mould tool must be made to ensure the integrity and accuracy of the moulded component. Mould location can be divided into two categories，primary location and secondary location. Primary location usually takes the form of pillars and bushes positioned in the corners of the core and cavity plates respectively. Secondary location is additionally provided when the component accuracy requirement demands it, i.e. the moulding of thin-walled components. Taper location bushes or crossed location blocks are frequently utilised for this purpose and are usually positioned on the centre line of the mould halves for maximum effect. Mould tool location is subject to wear during tool use and should be considered as part of the standard com¬ponent category by tool designers and toolmakers alike.

This site uses Akismet to reduce spam. Learn how your comment data is processed.